Manx Whale and Dolphin Watch in the early days

Manx Whale and Dolphin Watch was set up in June 2006, by John ‘Galps’ Galpin.  John had moved to the island in the 90’s with his wife Val, and from their house on the west coast, started seeing whales and dolphins from their window as well as basking sharks. Enthusiastically, Galps began some research into what species can be found here, but soon discovered that there was no information or documentation anywhere, as no one had ever studied whales and dolphins in Manx waters and little historical evidence existed. Galps took it upon himself to learn about these magnificent mammals and raise knowledge within the Manx community.

He sought guidance from the Sea Watch Foundation, based in Wales, and set up a simple website whereby people could report any sightings. In time, he began to learn about the species that pass through here and started giving talks to interested members of the public. In 2007 Galps decided that in order for the organisation to progress, he needed the help of marine mammal scientists to start conducting scientific research into relative abundance and distribution of our local species. He enlisted the help of four eager young scientists; Tom Felce, Eleanor Stone, Simon Mitchell and Sharon Bond, asking them to move to the island and begin systematic surveys of Manx waters both on land and at sea.  With no idea what to expect or the potential of what they would achieve, it was going to be a huge challenge.

Manx Whale and Dolphin Watch in 2020

Manx Whale and Dolphin Watch have now been studying cetaceans around the Isle of Man for 14 years. We carry out land-based surveys, boat-based surveys, photo-identification, outreach and education and run a small visitor’s centre. We work closely with the public, appearing at various events, giving talks and teaching in schools. We have taken on full-time volunteers (the Dolphineers) every summer since 2010 who help us run the organisation throughout the summer, as well as local volunteers who assist with survey work. We are a marine stakeholder and liaise with DEFA to advise on any marine planning issues, and work with other cetacean research groups around Britain and Europe to provide data and learn about the movements of animals between locations. We currently consist of 3 voluntary staff; Tom Felce, Jen Adams and Bryony Manley with the help of our summer Dolphineers and local helpers.

In 2014, we tragically had to say goodbye to Galps. We miss him dearly and continue our work in honour of him. Our research vessel is named after him, and you can see her berthed in Peel marina. Thank you Galps for starting something so incredible and we hope to do you proud long into the future. 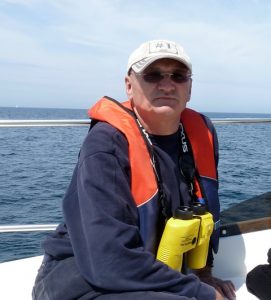