In April 2022, Manx Whale and Dolphin Watch took over the public sightings scheme for basking sharks in Manx waters. Manx Basking Shark Watch (2004-2022) has ceased operating and all tagging/DNA sampling has stopped in Manx waters. Unused tags were given to Irish Scientists and have successfully deployed off Achill Island.

Every summer, from mid-May to mid-August, mighty basking sharks descend upon the Isle of Man.
Most basking shark sightings are reported within 1km of land along a 40km stretch of easily accessible coastline on the west and southwest of the Island.

When the seas are calm and the weather is settled and sunny, the plankton concentrates at the surface of the sea and the basking sharks feed on this plankton close inshore. You may even be lucky enough to see basking shark courtship activity from the coast with the naked eye or binoculars.

Basking sharks can reach a whopping 11m but typically average 4-6m, making them the second largest of all sharks. Their huge triangular dorsal fin can be easily spotted at the surface, sometimes along with tip of the tail fin and bulbous nose. Colour is dark grey/brownish. Their huge mouth is usually agape as they spend the majority of their time feeding. Contrary to common belief, a basking shark can close its mouth!

Basking sharks are huge, slow moving fish, maintaining a steady course as they allow tidal currents to filter water and plankton through their gills. The huge triangular dorsal fin is seen moving slowly and steadily, often in a straight line. If the shark is high enough in the water column, the tail and nose can be seen penetrating the surface at equal distance either side of the dorsal fin. Basking sharks do not possess any bones making them extremely bendy creatures. Sometimes you will see the triangular shaped dorsal fin glinting at the surface as the animal bends its body in line with the current, reflecting the sun off it. If a shark decides to dive, it does so by slowly sinking lower in the water. They do not ‘roll’ up and down through the water like a dolphin or whale.

When basking sharks come together to court, as they do in Manx waters, they can be seen displaying some really interesting behaviours. Incredibly, for such a massive and slow animal, basking sharks are able propel themselves out of the waters and full body breach (leaping clear of the water). This is assumed to be a male courtship signal, displaying to the females that they are fit and strong. It may also be effective in removing lice and other parasites that reside on shark skin.

Before 2010, basking sharks were in such abundance in Manx waters that fishermen use the descriptive example of having been able to seemly ‘step across sharks to get back to land’. Literally hundreds of basking sharks gathered along our west coast each summer, feeding and courting, and putting the Isle of Man on the map as a basking shark hot-spot.

Sadly, over the course of the last decade, there has been a huge decline in basking shark numbers. To put it into perspective, back in 2009 there were around 500 sightings submitted, and by 2019 that had fallen to 50. Since then, year on year, numbers have dropped again, with only 3 sharks reported in 2020, and 8 in 2021. There are many theories as to why this is the case but there is still no conclusive evidence. More research needs to be done into plankton levels and underwater electronic cabling.

Previous tagging work conducted by Manx Basking Shark Watch between 2007 and 2017 show where our sharks have travelled to and from. A total of 31 tags were deployed, as well as DNA samples, to establish the range and distribution of Manx sharks. The findings were extraordinary: Most of the tagged basking sharks displayed a north to south annual migration, heading south as the water cooled after the summer, some over-wintered in the Celtic Deep, one crossed the Atlantic to Newfoundland, and another travelled to Morocco two years running.

Basking sharks are found in temperate and tropical waters. In temperate climates they are seen feeding near to the surface, giving them their name as they appear to bask at the surface. In tropical waters they are found at greater depths, below the thermocline (Ebert et al. 2013, Dewar et al. 2018). The species vertically migrates to depths of 1.26m (Gore et al. 2008) and are known for their long migrations. 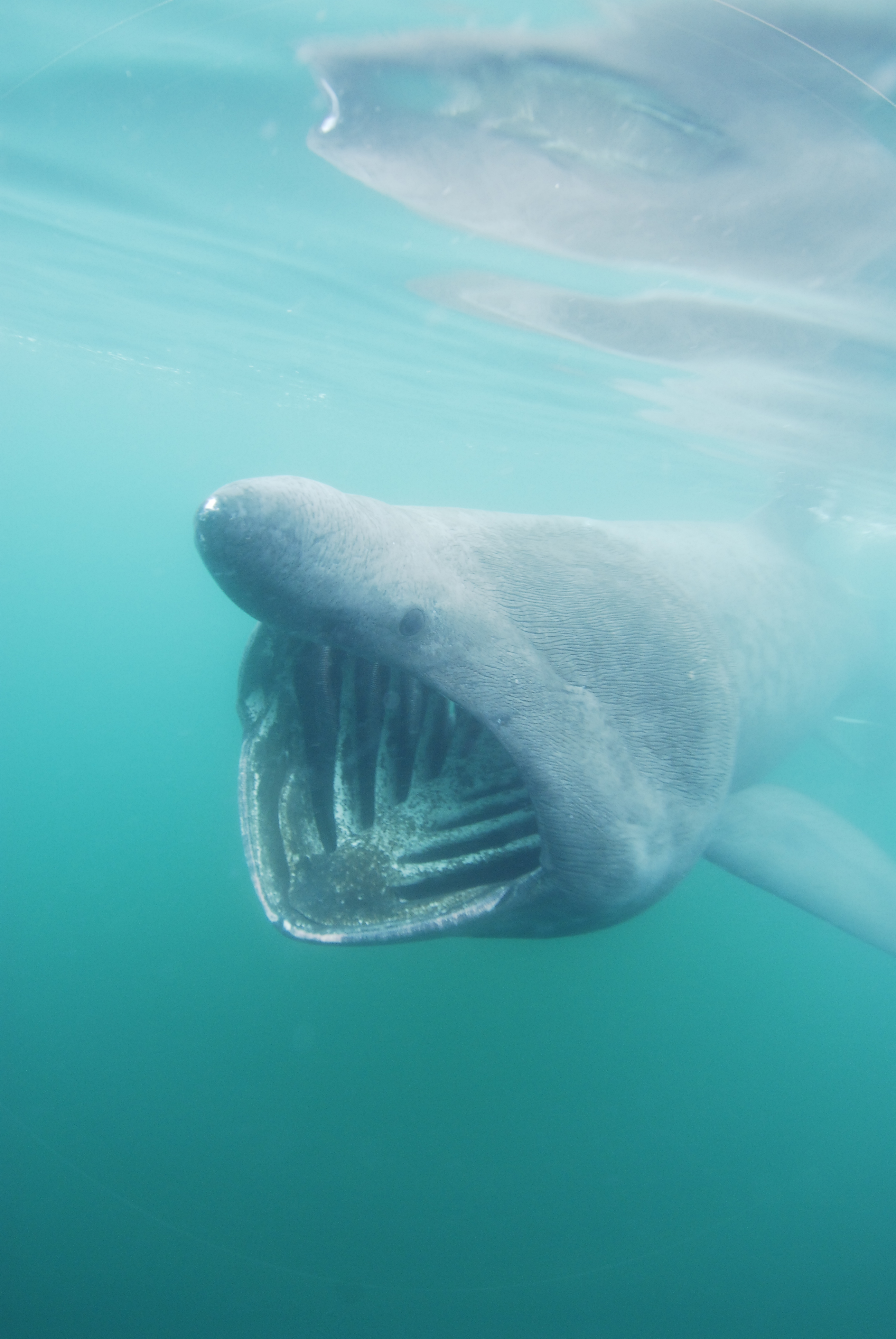 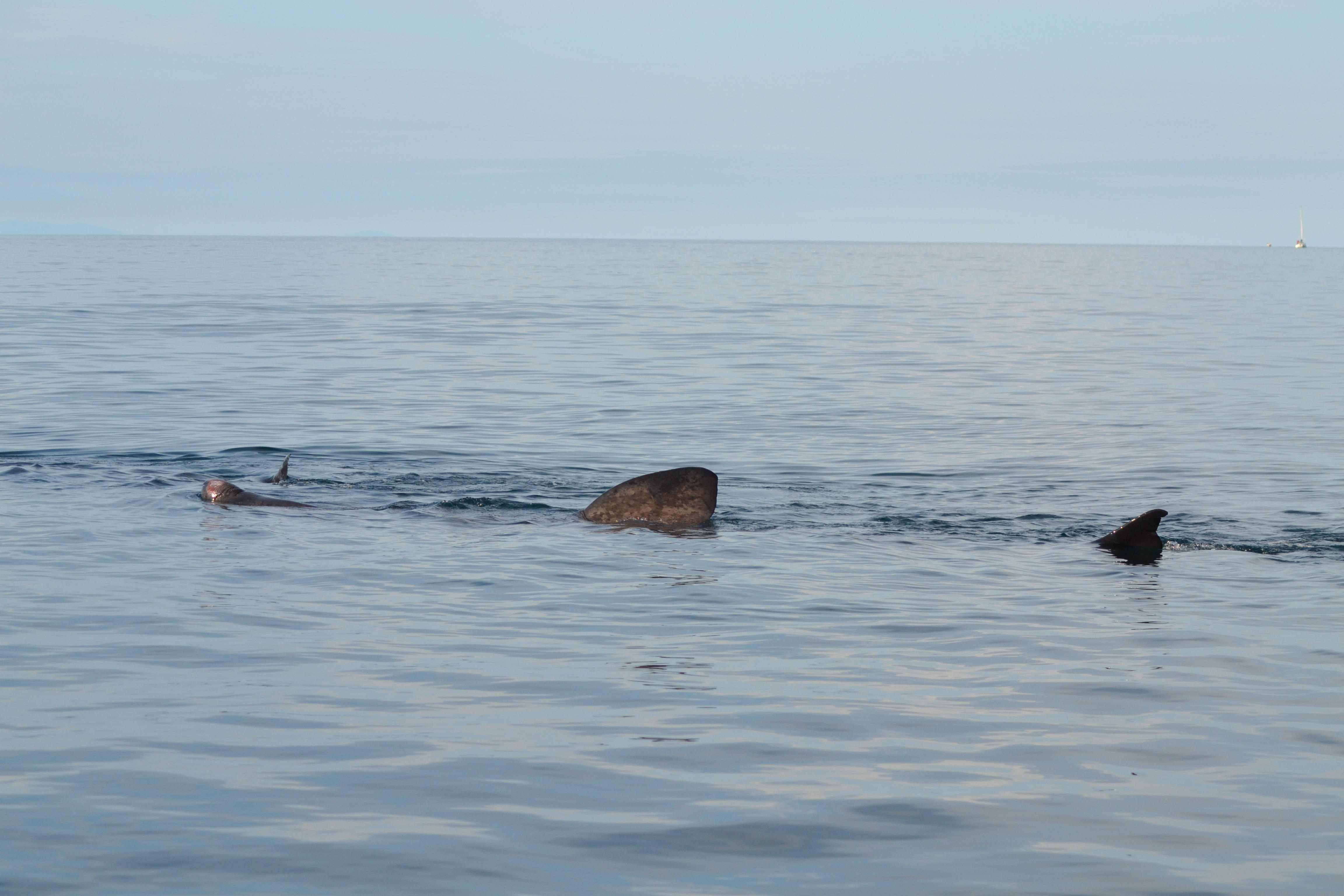 The ‘3 points’ of a basking shark; Bulbous nose, dorsal fin and tail fin, are sometimes seen if the shark feeds very close to the surface. Photo: Anna Bunney

Basking sharks can be seen in close proximity to the shore like this one at Niarbyl, on our west coast. Photo: Anna Bunney 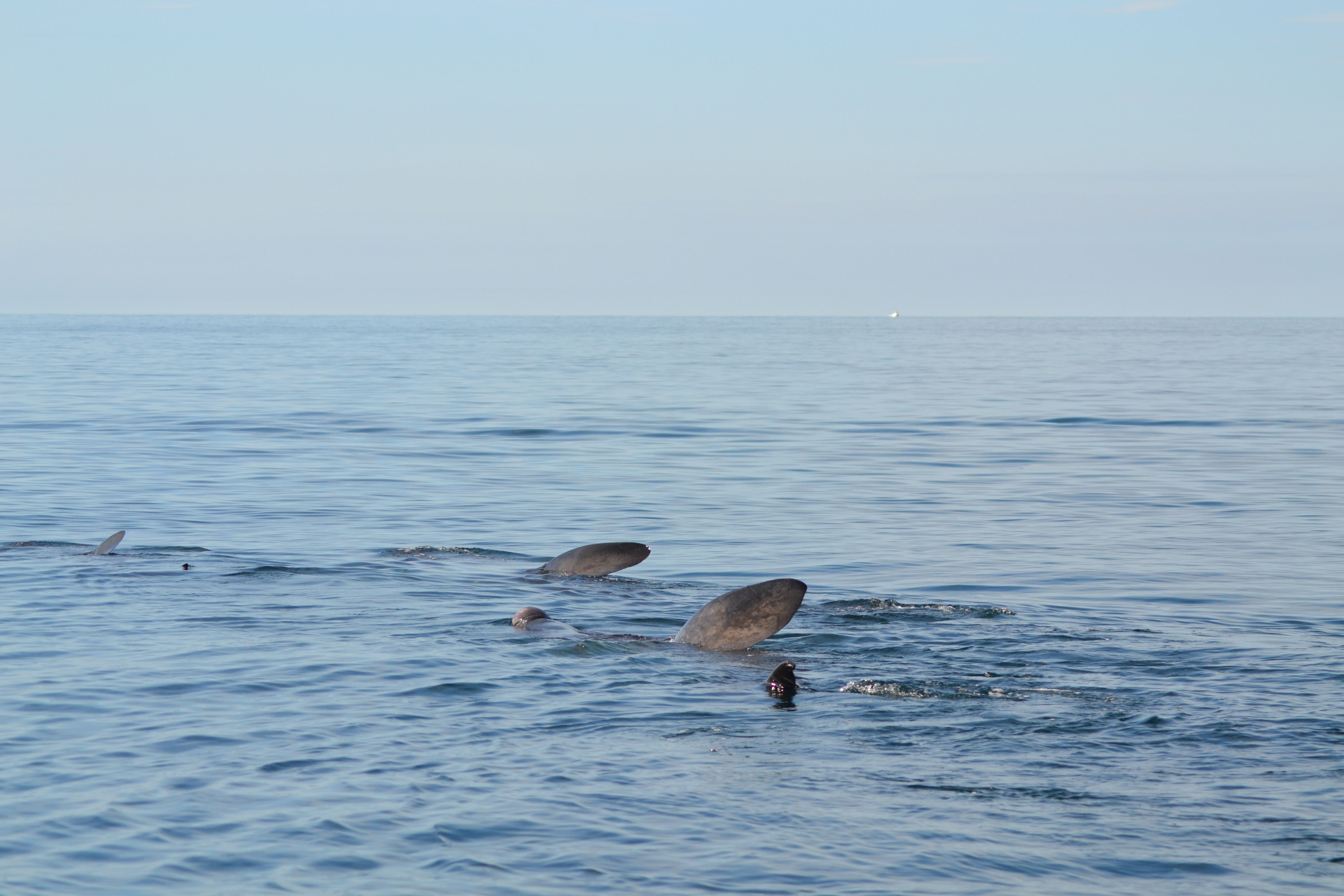 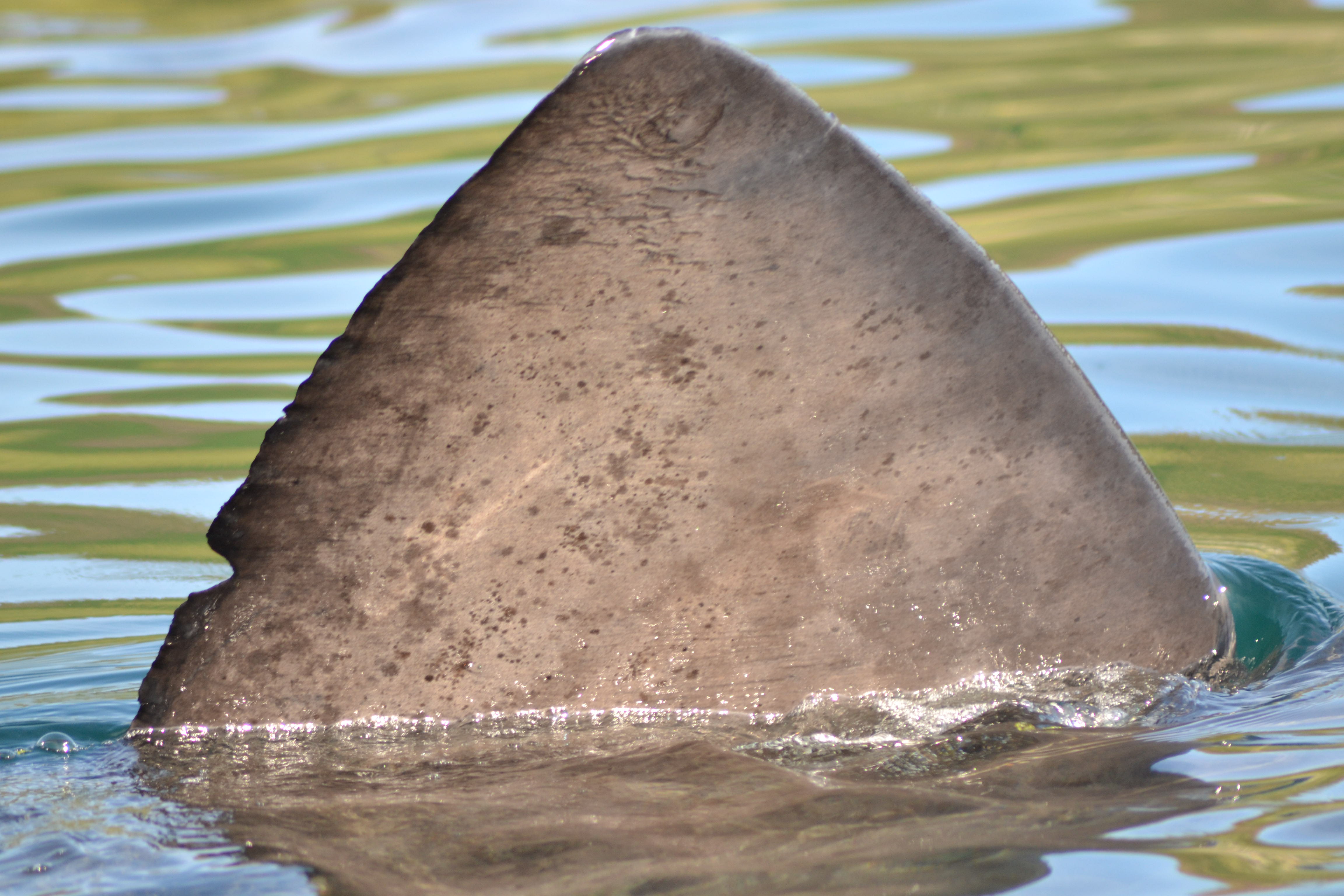 The dorsal fin often possess nicks and spots, making each fin unique and identifiable to researchers 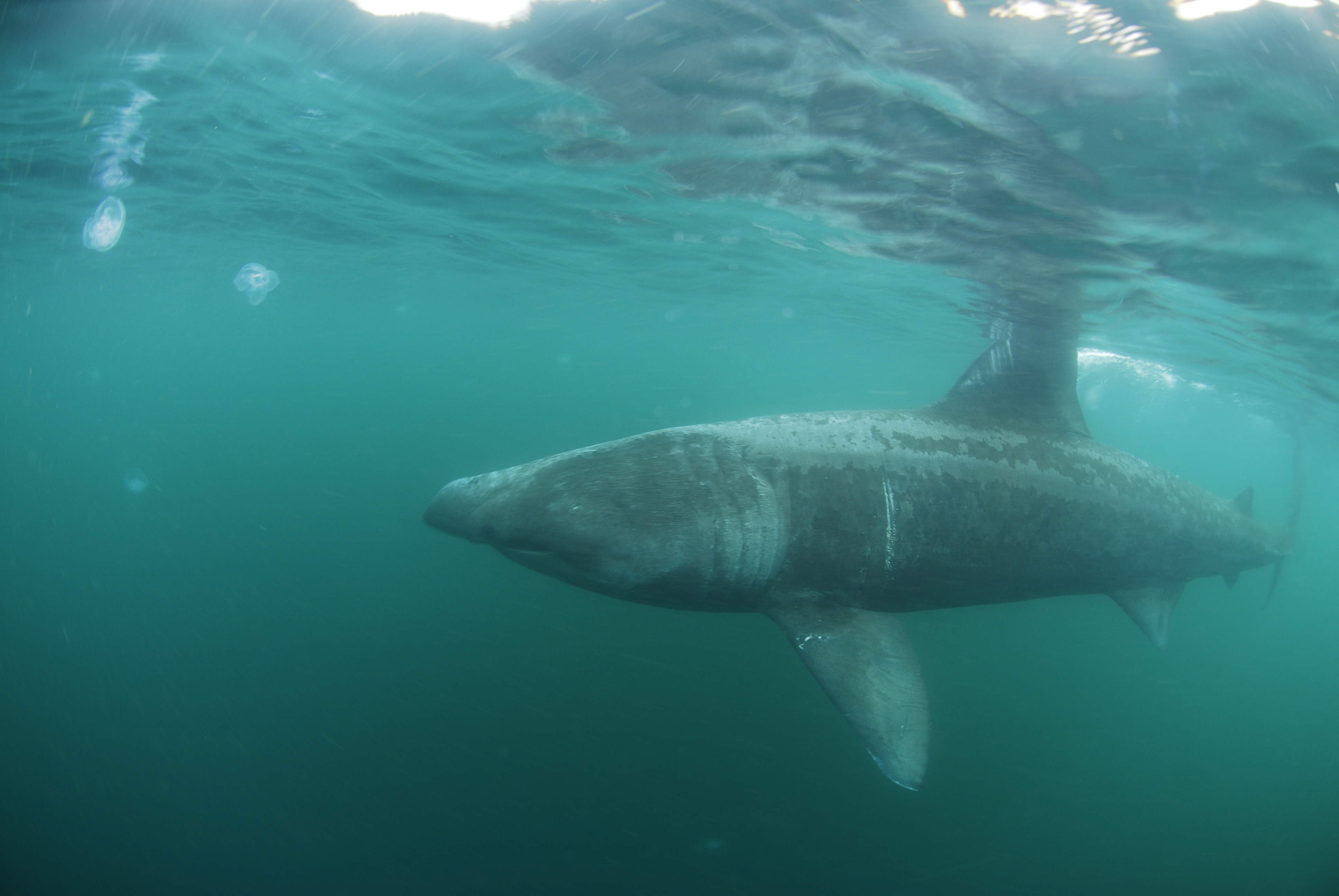