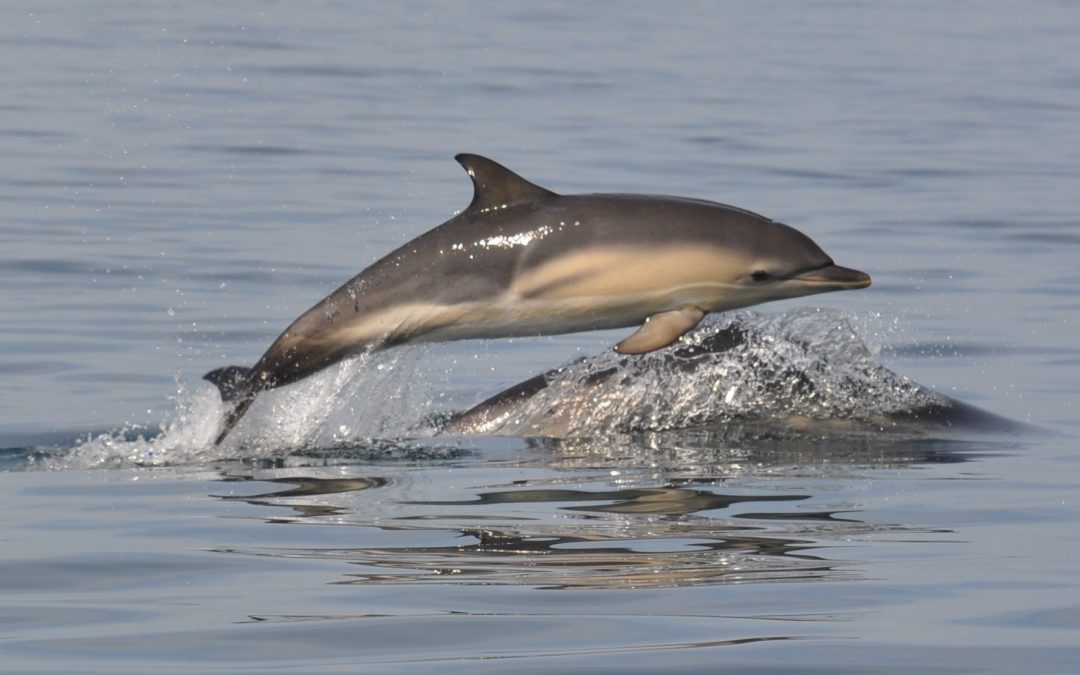 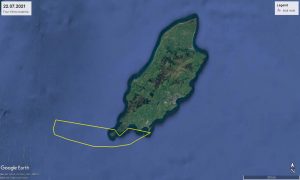 22nd July started bright and sunny, as it would go on, with little to no wind allowing for the hottest day of the year and mirror-calm waters. Setting off in Four Winns from Port St Mary just before 11am we first headed east a little towards Langness in search of cetaceans. We soon found a small pod of six Risso’s dolphins consisting of three mother-calf pairs travelling slowly southwest towards the Calf of Man, a favourite Risso’s dolphin area in the summer months. The dolphins showed little interest in us and our boat, so after a few pictures for photo-identification we headed off to the south and then west on the look out for more cetaceans. We weren’t disappointed, with a near constant stream of harbour porpoise sightings over the next few hours. 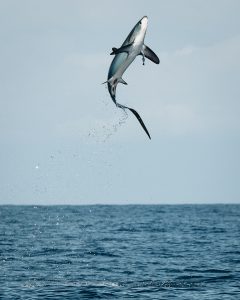 Throughout the trip, amongst the vast rafts of razorbills, guillemots, and Manx shearwaters, we were lucky enough to spot a number of lovely puffins, including a few juveniles. We also kept a sharp eye for any litter and picked up as much as we could, including a fish box, plastic gloves packet, blue plastic sheet, plastic milk bottle, three helium balloons, and a polystyrene take-away box.

Nearly three hours after our Risso’s dolphin sighting we encountered a large minke whale around 8 nmi west of the Calf, which we watched for a few surfacings. Whilst scanning the area with binoculars and seeing yet more harbour porpoise an incredible distant sighting was observed by Bryony. A thresher shark breaching not once, but three times, only the second record of it’s kind for MWDW!

An hour later, after another spate of harbour porpoise sightings a group of three common dolphins was spotted who enjoyed a brief fast swim in the bow and wake of our boat. As one of the fastest dolphin species common dolphins are always a joy to watch, seeming so full of energy. Whilst enjoying the moments after the brief encounter with three common dolphins and scanning the surrounding area, a distant disturbance of the otherwise calm water was observed. Looking through binoculars it appeared to be a large ‘charging’ pod of more common dolphins so we headed over to investigate not knowing what an incredible encounter we were heading for!

Approaching steadily with our boat the dolphin group quickly noticed us and headed over to investigate with some of the pod enjoying riding in the bow and wake of the boat. As we watched it became clear the pod was one of the largest we’ve encountered in Manx waters, probably around 100 dolphins. Amongst the number were many calves from extremely small, young animals to slightly older juveniles born a year or two ago. After the dolphins had enjoyed the movement of the boat for a while we cut the engines, and in the quiet were treated to the sounds of dolphin clicks and whistles penetrating the hull as they surrounded the boat. Many adults bought their calves close the boat the investigate, swimming underneath and all around us, totally at ease with our presence in the calm waters around 11 nmi west of Port Erin. As the dolphins continued with their natural social behaviour, we had the incredible fortune to witness two behaviours which cetcean researchers rarely get to see both mating and calf suckling!

We slowly started the boat up again to move away, and after they followed us for a moment the group turned and moved away, further offshore, leaving us all speechless as we reflected on such an incredible encounter of marine wildlife in Manx waters!