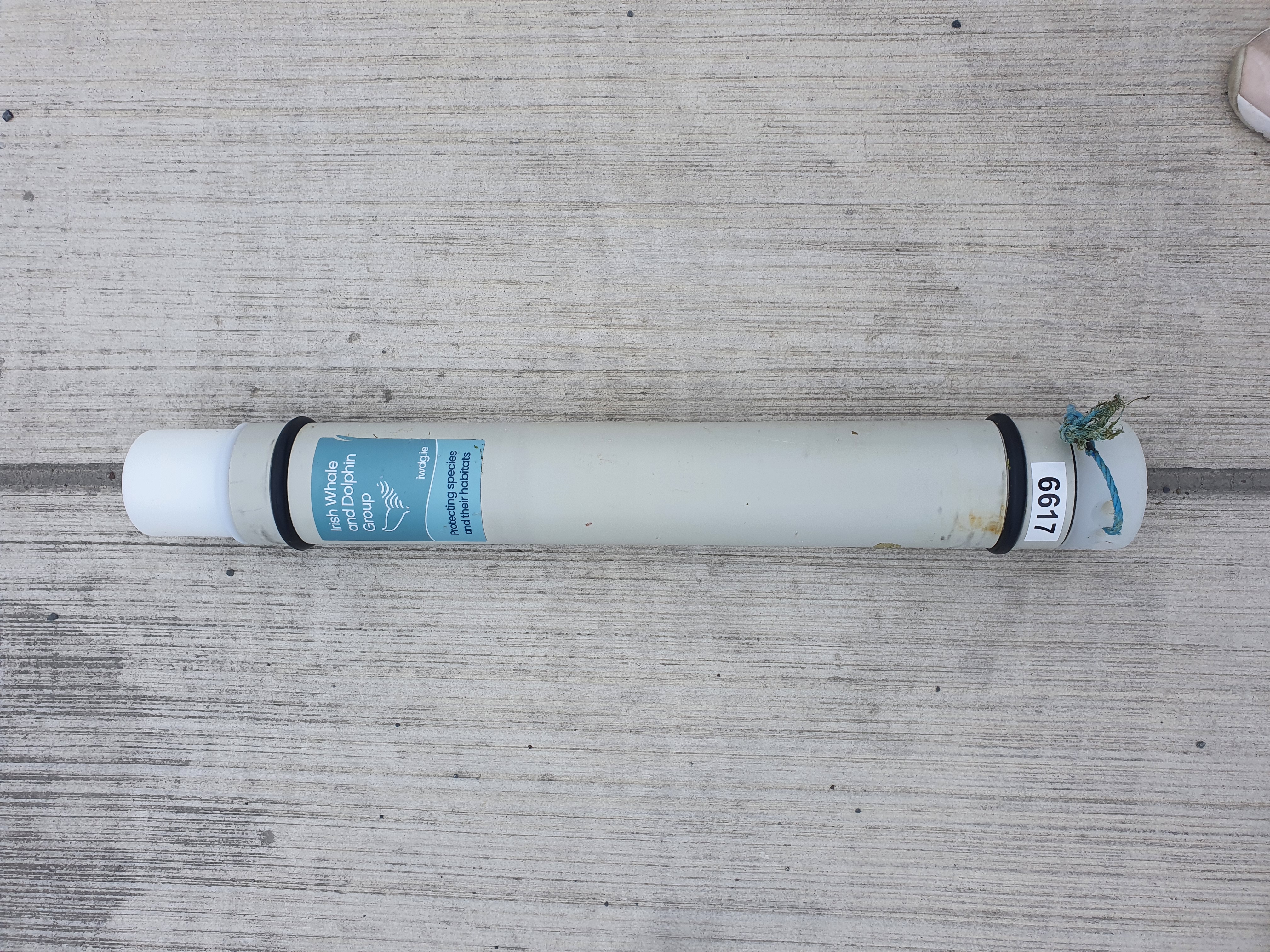 An underwater monitoring device, known as an F-POD, used to detect porpoise and dolphin clicks, has been returned to Dublin after being found washed up on Gansey Bay

Sam and Voirrey Samson, who were out dog walking whilst picking up bits of rubbish, first thought the device was a piece of old drainpipe washed up against the rocks until they noticed it had an Irish Whale and Dolphin Watch (IWDG) sticker on it. They took the device home and reported it to Manx Whale and Dolphin Watch (MWDW), who identified it as an underwater monitoring device containing important data.

Static Acoustic Monitoring (SAM) through the deployment of F-PODs detect dolphin and porpoise vocalisations and logs their occurrence. SAM monitoring provides information on use of the spoil grounds by harbour porpoise prior to, and during, dredging campaigns and to monitor if any displacement from the site occurs. SAM is effective in assessing habitat use by porpoise and dolphins and is particularly useful in studying behaviours such as feeding strategies.

SAM equipment is recovered and analysed every 3 months. A “before, after, control, impact” type analysis will provide opportunities for adaptive project management through regular feedback to environmental managers and contractors. This acoustic data is also being used for PhD research, funded by RPS and Dublin Port. The focus of this research is to assess harbour porpoise habitat use and behaviour within the Rockabill to Dalkey Island SAC, which encompasses the mouth of Dublin Port.”

To ensure the device and its data were returned safely to Dublin, MWDW contacted the Isle of Man Steam-Packet Company for assistance. The device travelled onboard the Manannan on 7th June and was left safely with the Steam-Packet agent in Dublin, before being picked up by Clowie.

MWDW and IWDG would like to express their sincere gratitude to the Isle of Man Steam-Packet Company for going above and beyond to ensure this important device was safely returned.

The Isle of Man Steam-Packet Company are also assisting MWDW with their roadshow event in August, which sees realistic life-size inflatable whales, dolphins, sharks, seals and turtles travel to the island for a fun and educational weekend event. The MWDW show takes place on 6th and August at the Villa Marina Promenade Suite. Tickets are £5 for adults, with kids going free, pay on the door.