On 17th November 2020, MWDW, along with the Manx Wildlife Trust and DEFA, attended an unusual stranding of a long-finned pilot whale Globicephala melas. The animal had washed in on the morning tide the previous day and was located by the shipwreck at Jurby.

It was a young animal, measuring 4m (14ft), and the carcass was very fresh with no obvious cause of death (no evidence of entanglement, ship strike or malnutrition for example). There was some marking on the skin around the tail stock which looked like it could potentially have been caused by a rope, although it is not possible to tell for sure whether the cause was anthropogenic.

Led by Dr Lara Howe of the Manx Wildlife Trust, a partial necropsy was conducted, taking samples of blubber, rib, liver and a small amount of stomach contents. Some parasitic nematodes were found along with a black tumour-like artefact, but we cannot confirm what this is until it has been analysed and results come back from the UK. Nematodes are not that uncommon in cetaceans and other marine animals and it is relatively normal to find them during a necropsy.

Samples have been sent to the UK Cetacean Strandings Investigation Programme (CSIP). Results will be publicised when we get them. 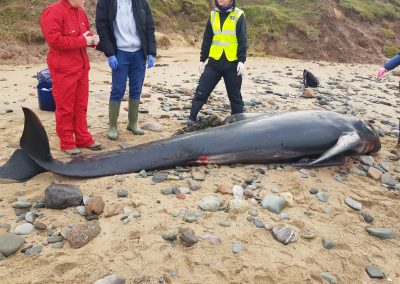 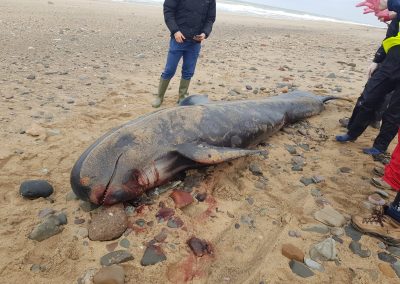 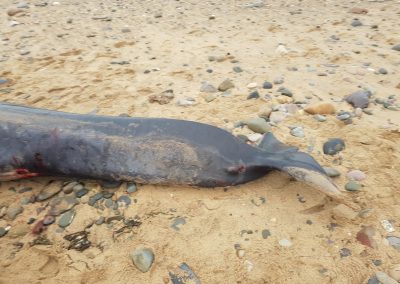 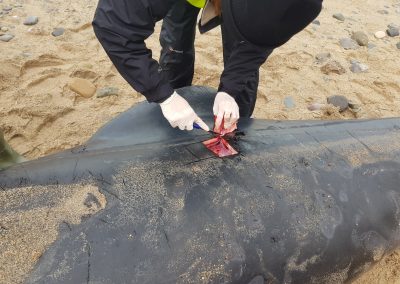 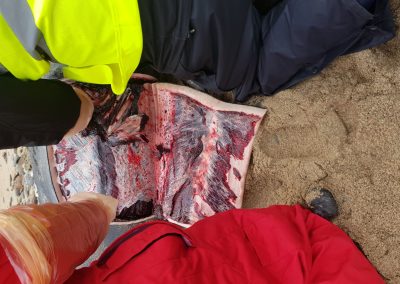 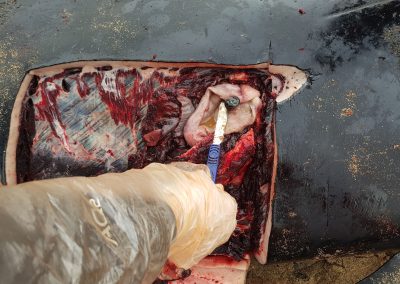 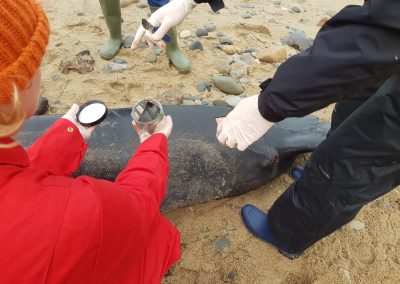 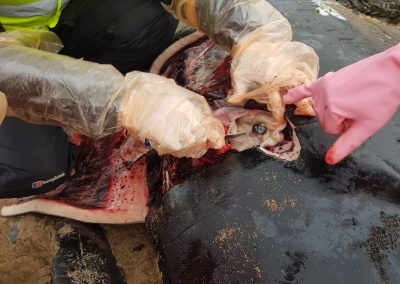 There are two species of pilot whale, long-finned and short-finned; names relating to the length of the pectoral fins rather than the dorsal fin.

Long-finned pilot whales are found in temperate waters, with their short-finned counterparts seen in the tropics. The ranges of these two species hardly overlap.

Long-finned pilot whales are rarely seen around the British Isles, the closest place to the Isle of Man where you are likely to see them is the Shetland and Faroe Isles. It is very unusual to see them in the Irish Sea and any sightings that do occur are likely the result of a pod being sent off course.

Pilot whales spend their lives in stable family pods with a matrilineal relationships. They are polygynous, with males living and mating with multiple females, but females only mating with a single male. Polygyny is extremely rare among mammals.

Due to the nature of their relationships, pilot whales are highly susceptible to strand en masse. A recent mass stranding event occurred off Tasmania in September 2020, with around 300 animals stranding over a couple of days. Pilot whales appear to have the rare ability to purposefully follow an ill family member onto the beach, making a conscious decision to kill itself.

This Manx stranding appears to be a lone case. There have been no other sightings alive or dead of pilot whales in the Irish sea recently, so we do not know where this individual came from or what happened to the rest of the pod.