Please see the link below for ways in which cetacean science can fit into the National Curriculum for KS 1 and 2. The information is based on the new UK curriculum.

Cetaceans in the curriculum

To book fill out the form below or contact Jen directly to discuss: education@mwdw.net or 393496. 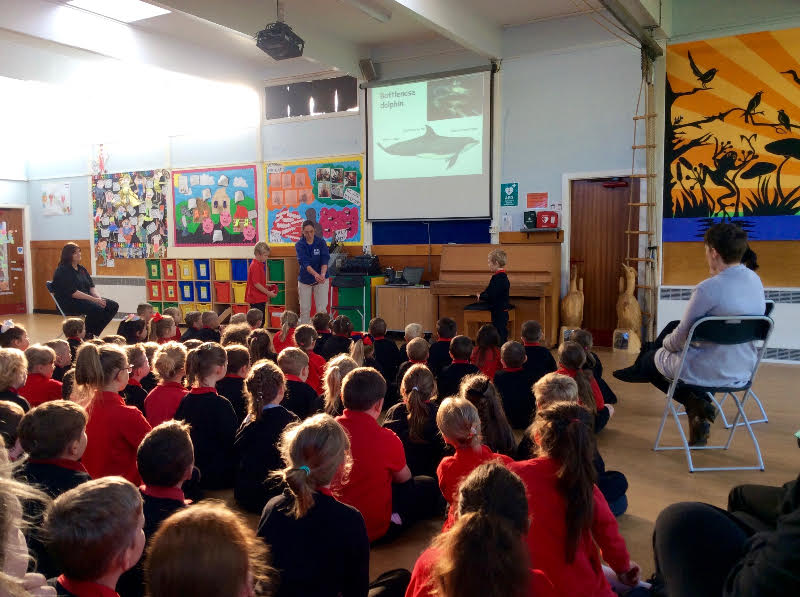 Any of the below sessions followed by measuring out species in the playground, break time, then back to the class to discuss threats and conservation issues (with interactive activity) Brainstorm ways we can help keep the oceans clean and how each and every one of us can take steps to make a difference. This session is very thorough and gets the children actively thinking about the world around them and the issues we face, coming up with ideas to make positive changes.

An engaging and interactive look at whales, dolphins, porpoises, seals and basking sharks and how to tell the different species apart. Spot the difference by looking at head shape, fin shape, scarring and colour.  Learn how dolphins and whales communicate, hunt and socialise. Measure out the different species using a 30 metre tape. Tips on how to go out spotting for yourselves and good places to look. Q&A. This talk is ideal for an entire school assembly and can be adjusted to suit any age group. Jen will bring Perkyn the porpoise.

An interactive look at marine predators of all shapes and sizes from around the globe. How they have adapted to their environment and use trickery to fool their unsuspecting prey. Perfect if your class are learning about food chains and adaptations.

Discover the marine wildlife of the Arctic and Antarctica by comparing differences between the animals found at each pole and how they survive in such hostile environments. Frozen planet is suitable for very young children and is presented in a story book style, looking at comparisons between well known species and how they feed and survive in freezing places.

Frozen Kingdoms looks in depth at species of cetacean, pinnipeds (seals and sea lions) and birds that live at the poles and how they have evolved to live successfully within their habitat. This session covers geography, ocean depth/temperature and climate change and introduces pupils to species they probably would not have previously heard of.

Find out about the marine wildlife of New Zealand and the Isle of Man by looking at the comparisons between marine species found in each region and how they have adapted to live in completely different habitats, despite both being islands. Discover some very endangered species that are endemic to New Zealand and learn about the geography and water depth surrounding the two regions. As well as cetaceans, we touch look at seals, sea lions and sea birds including albatross.

A detailed look at whales, dolphins and porpoises around the world. How they hunt, communicate, migrate sleep, look after their offspring, methods of predation and prey species. We look at the various species including including river dolphins. This session works well as a follow up to the Marine Wildlife of the Isle of Man session, as a way of comparing species found in different habitats around the world, and looking at ways they have adapted to thrive in various climates.

Youth groups (Rainbows-Guides and Beavers-Scouts) £2 per child. Up to an hour.

School and youth talks can be followed up by a land watch session. This is a superb way of getting children excited about the outside world and actively involved in data collection and observation techniques.

For school trips to run, a minimum of 1 adult per 4 children is required. Please note that due to health and safety there is a maximum group size of 25 children. Binoculars, clipboards, pens and forms are provided. Risk assessment will be provided in advance. You will need your own high vis jackets.

Please be aware that land-watches can be subject to short notice cancellation due to weather.

With the help of her friend, Perkyn the Porpoise, Jen will visit your nursery group and talk to the little ones. Sitting in a circle with a laptop presentation she will guide them through various whales and dolphins; how some and teeth and some do not, how they talk to each other, sing-songs and play games. Using Perkyn, she will teach them the names and functions of the body parts; dorsal fin, blowhole etc 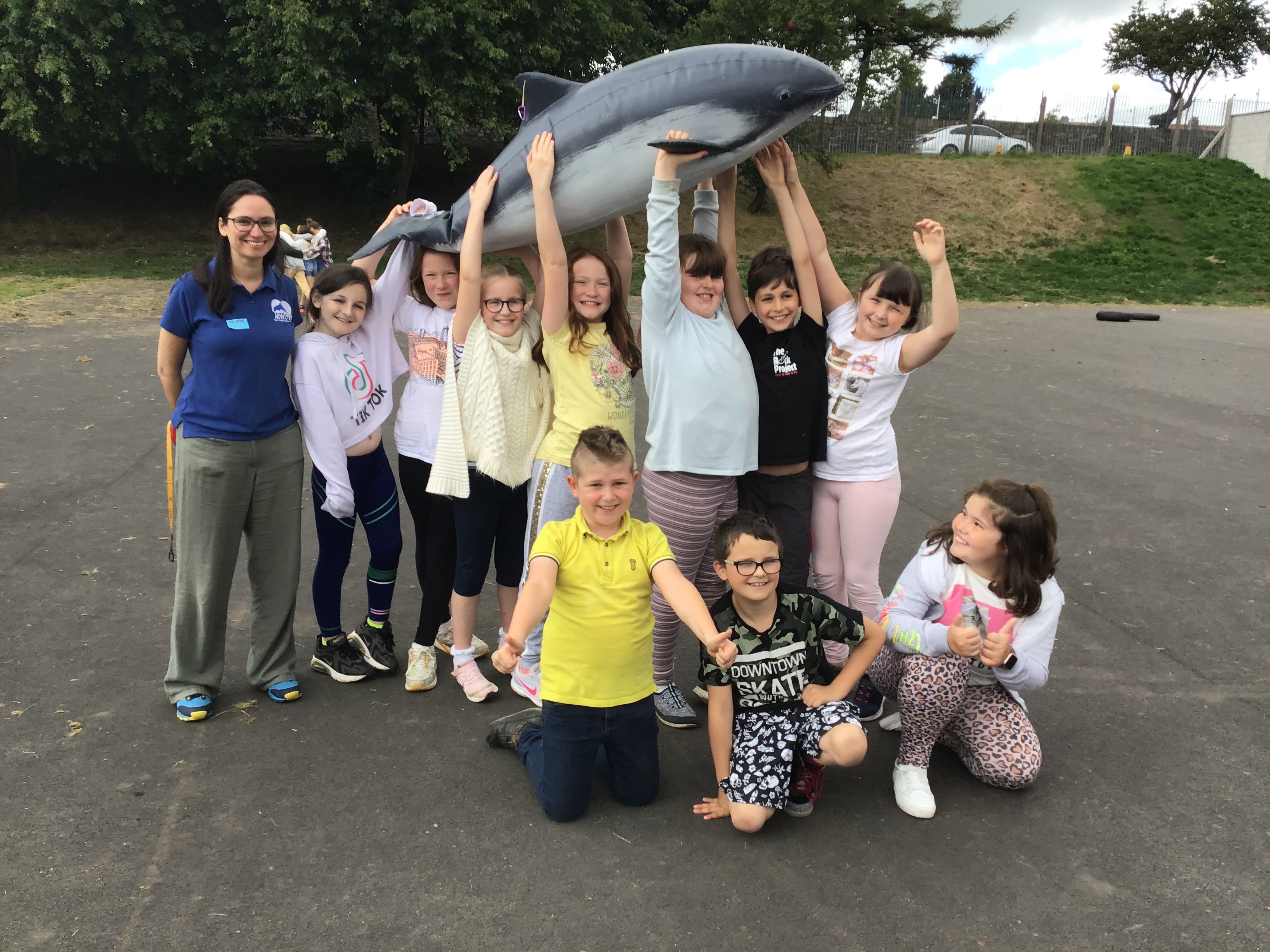 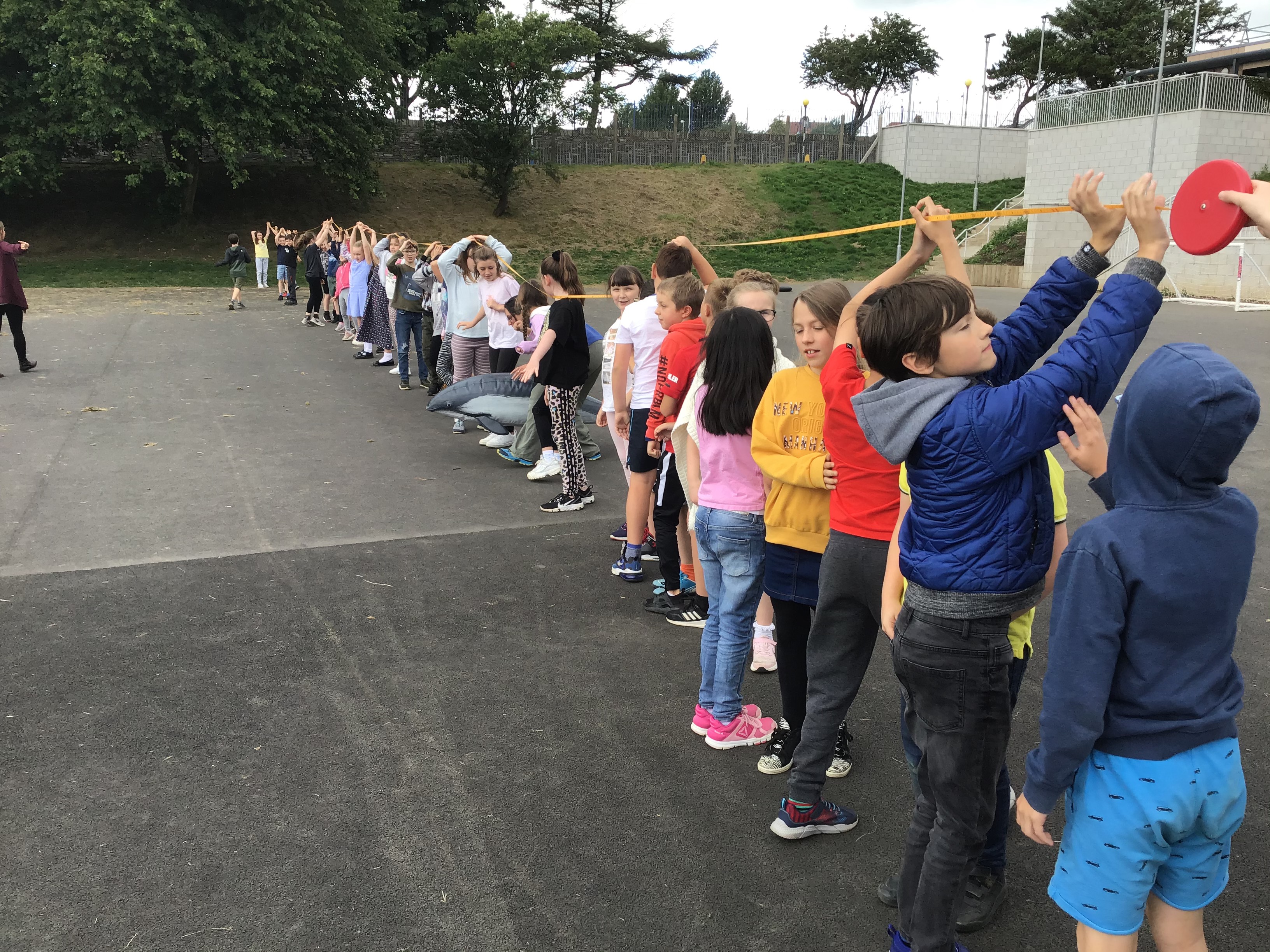 Measuring out a blue whale at St Mary's school

Thank you Jen for coming out to our Year 4 children at St Mary’s this week.  The children were really engaged and curious during your talk and it fitted in perfectly with our current learning.   Perkyn the Porpoise was a particularly big hit! We’ll definitely be in touch to book you in for another visit next time we come to this topic. 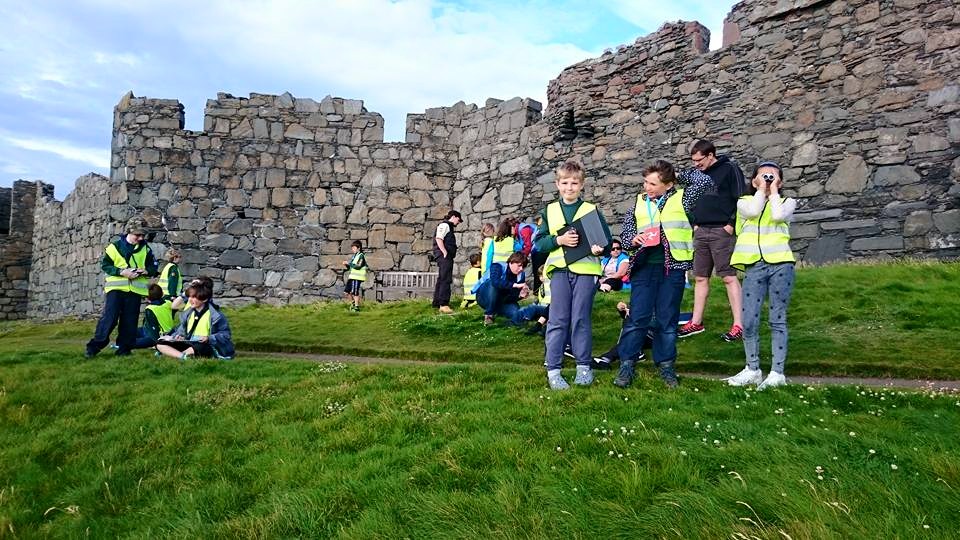 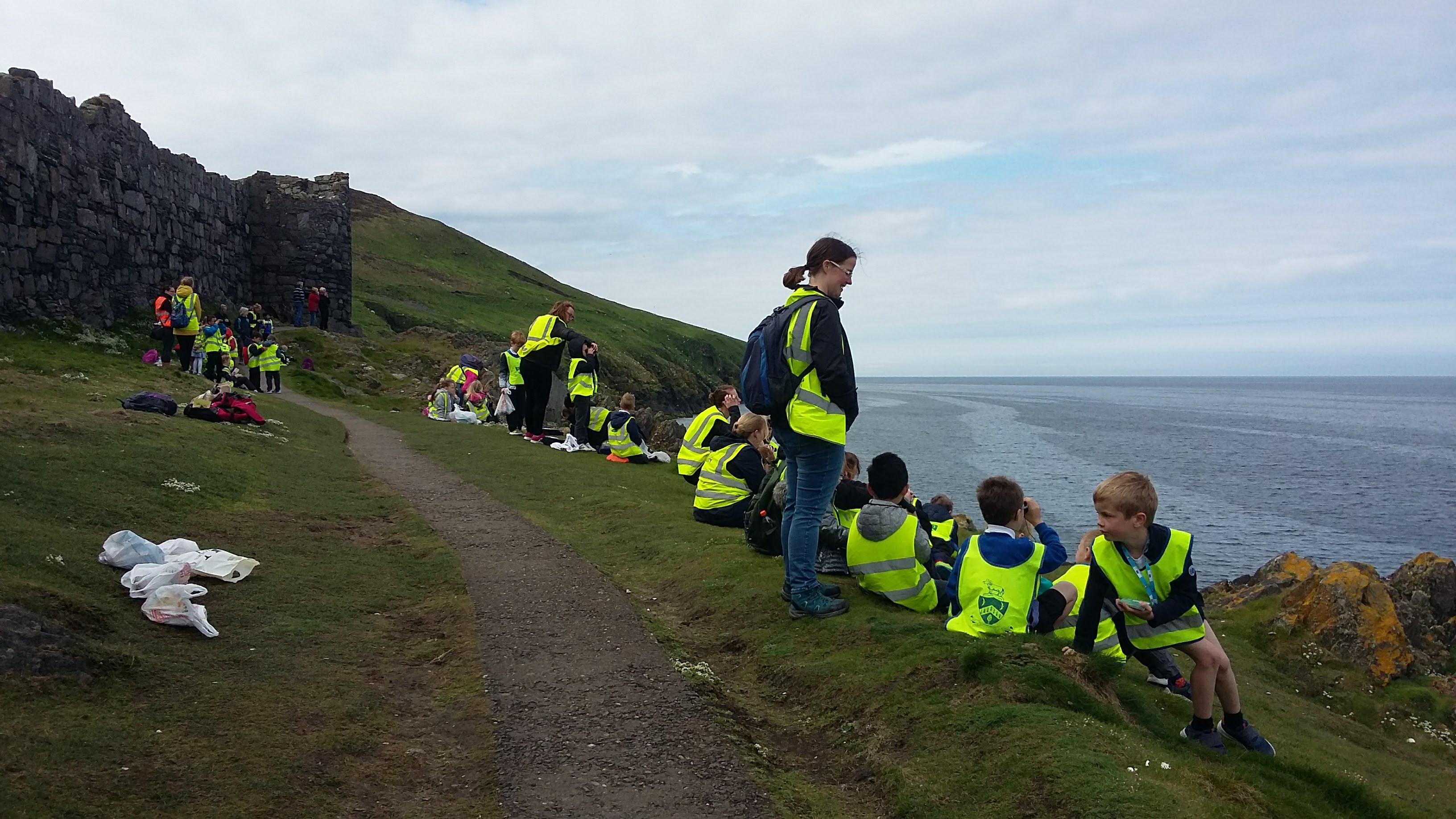 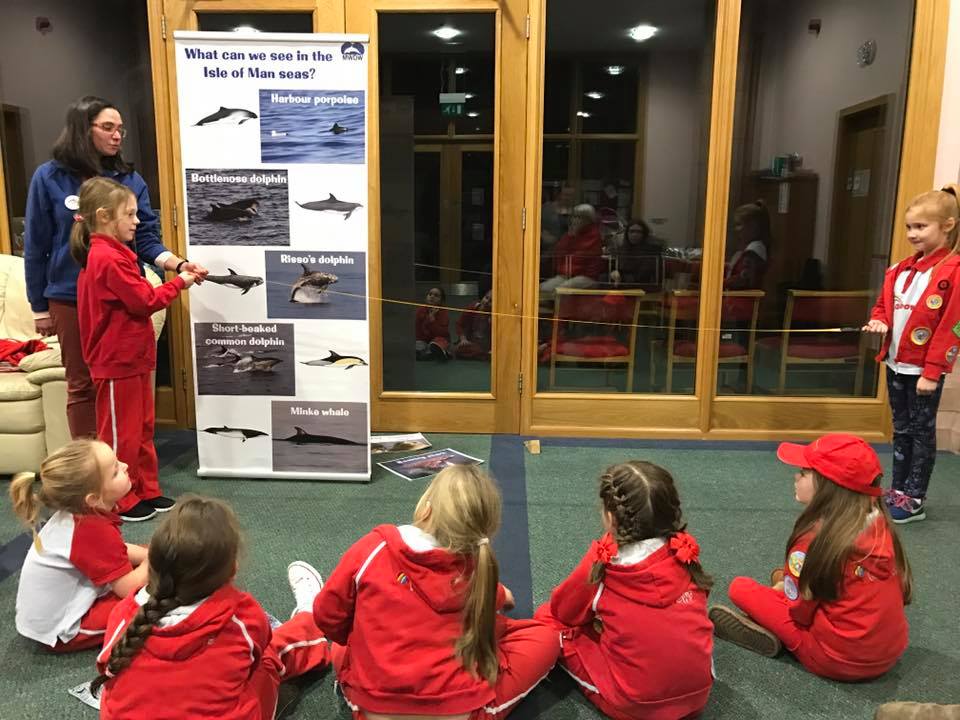 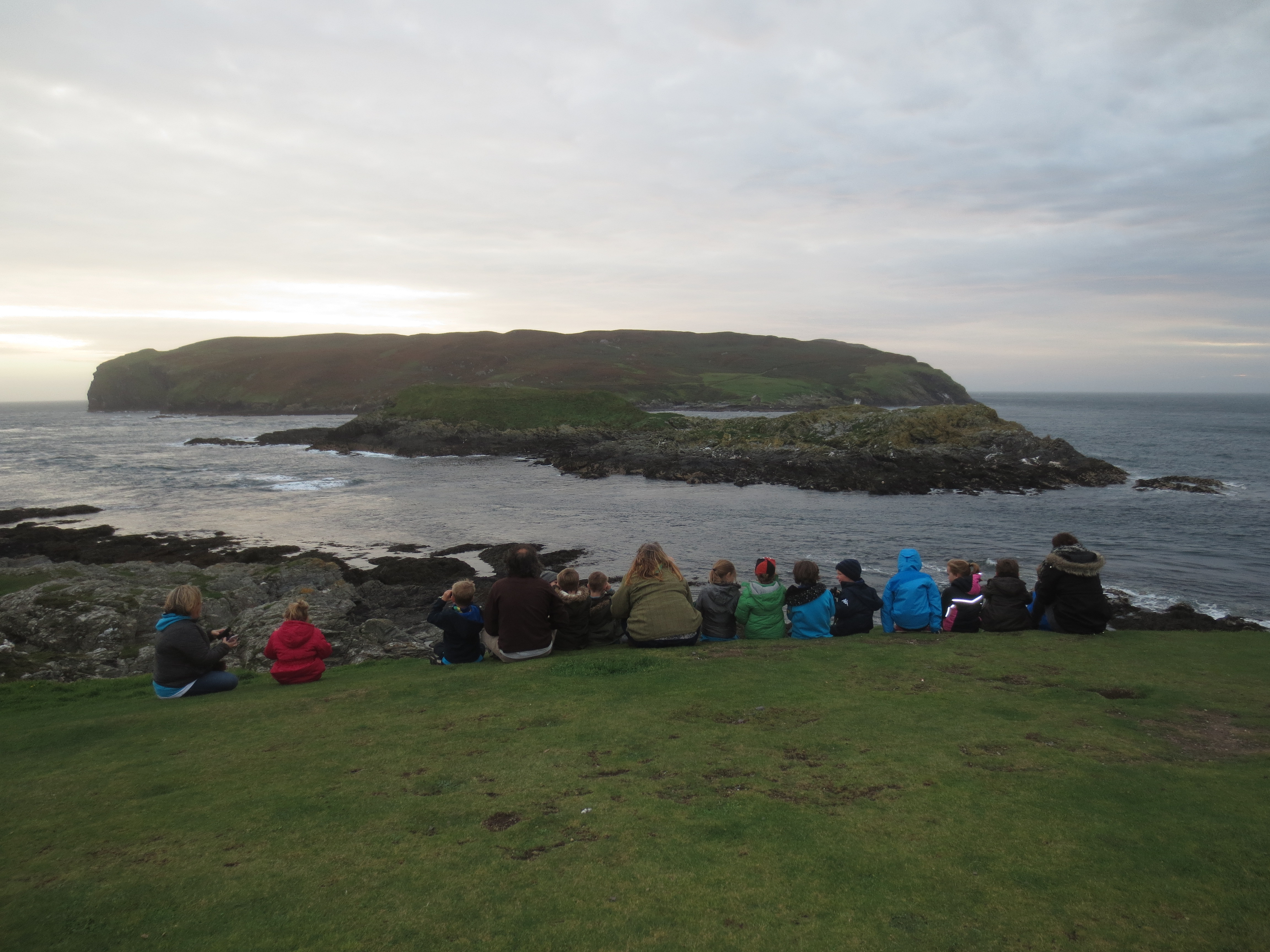 Rushen Beavers looking out at the Sound