September and October sightings round up 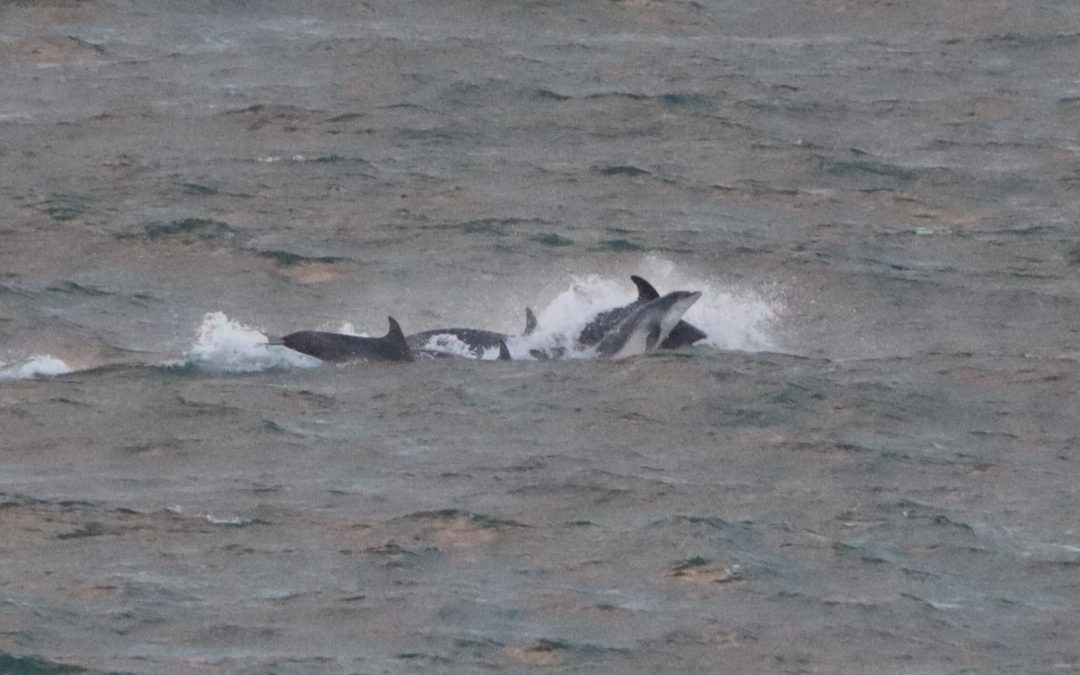 Written on the 9th November 2021. Featured image by Dave Corkish.

Many people assume that during the cold and windy winter months, dolphins leave our shores for warmer waters. Whilst it is true that some species like the Risso’s and common dolphin do leave, this is prime time for our winter-visiting Bottlenose dolphins to enter Manx waters in large numbers. October is a switch over month, with the last of the Risso’s dolphins generally trickling away come the end of the month and the Irish Sea Bottlenose dolphins (many of which come from Cardigan bay) heading to their winter feeding grounds around Isle of Man. Minke whales, which are normally abundant at this time of year, take advantage of the herring spawning season off our east coast which occurs September to November. The last of the Minkes are typically seen at the end of November, before disappearing until the spring.

So how have sightings been this autumn?

In September there were 8 sightings of Minke whale, with a further 10 in October. This is up from last year, with just 12 sightings recorded over the same 2 month period. The most recent and probably most interesting sighting is that of a Minke whale which has been spotted just 200 metres off Peel Castle, at the breakwater end. It has been reported 3 times over the last week and a half, most recently yesterday (8th November). If you wish to take a walk around the castle to look for it, keep an eye for diving gannets and large groups of herring gulls as they are most helpful indicators. Minkes are usually east coast orientated at this time of year, so there must be a nice big shoal of fish off Peel at the moment for this individual to feed on.

Our winter Bottlenose dolphins returned on 10th October and there is currently a pod of between 20 and 30 dolphins (with quite a few juveniles) around our coast. They were recorded on 9 occasions through September, 16 in October and twice so far in November, with the most recent sighting on the 5th in Castletown bay heading to The Sound.

Of considerable interest, is the lack of sightings of our resident Bottlenose mother and juvenile, Moonlight and Starlight, and it is entirely possible that they have begun associating with this large pod. In the table below, you can see there are just 4 sightings of total 2 (adults 1, juvenile 1) with the most recent on 26th October. The only way we would be able to confirm any new associations, would be through high quality photos of this pod, allowing us to look closely at the dorsal fins. As yet, we do not have any suitable photographs, but if anyone does, we would urge you to contact us and send them in as they could prove vital to our research. We know through previous photo-identification work, that many of our winter Bottlenose spend the summer in Cardigan bay, Wales, but there is still so much work to be done.

-update 10th November- we have just had news in that Moonlight and Starlight were possibly in Peel bay this afternoon and the larger pod was also reported off the breakwater this morning.