The Bottlenose dolphin is possibly the best recognised of all cetaceans. Young are born pale grey in colour becoming a uniform dark grey at maturity, with only their underside staying white. They possess a prominent ‘bottle’ shaped beak and have a curved dorsal fin which, like all dolphins, is located on the centre of the back. In temperate seas, as Manx waters are, they can reach a length of 4 metres (13ft) , whereas in the tropics they are distinctly smaller, measuring only 2.5 metres (8ft) in length.

Bottlenose dolphins are large, powerful and playful. They exhibit a wide variety of behaviour, often creating plenty of disturbance and white water as they surface. Behaviour can include bow riding, tail slapping, breaching and fast swimming. They are inquisitive and are often seen interacting and bow riding with boats. They have a reputation among scientists for bullying other smaller species; in the British Isles for example, Bottlenose dolphins have been known to bully and then kill juvenile Harbour porpoise.

The diet of a Bottlenose dolphin is varied and they can eat a wide variety of fish, cephalopods and crustaceans. Preference is for fatty fish like sea bass and sea trout, but they will also predate smaller fish species such as herring and mackerel. They are not fussy eaters and if hungry will even take small crustaceans like starfish and crabs. Like all dolphins, they echolocate to find their prey. Bottlenose dolphins across the world alter their foraging activities to suit their habitat; examples include driving fish up onto a shallow beach at low tide trapping the fish on the sand, with the dolphins coming half way out of the water to gobble up their prey. Other examples include the formation of mud circles using the tail fluke, resulting in a net of mud trapping the fish inside. The species is highly intelligent and unique behaviour is taught down the generations of a small pod, ensuring these skills carry on in to the future.

In Manx waters, Bottlenose dolphins are highly gregarious and hang around in very large numbers. Here, it is common to see more than 100 individuals stretched across the Manx coast, made up of smaller sub groups containing around 20 animals. In other coastal areas of the British Isles, such large group sizes in a small area is unusual.

Bottlenose dolphins are primarily coastal but also occur in pelagic waters. They have a worldwide distribution and can be found throughout temperate and tropical waters, but not the polar regions.

Bottlenose dolphins are predominantly a winter visitor to Manx waters can be seen here between October and March. Indeed, if you see dolphins here during the winter, it is unlikely to be any other species. They are occasionally seen during the summer months, but typically in smaller pods of up to 20. Through photo-identification and collaboration with the Sea Watch Foundation, we know that many of our Bottlenose dolphins spend the summer in Cardigan Bay, Wales.

In Manx waters they are generally seen along the east coast, where they often stay very close inshore and can be seen easily from land, creating lots of disturbance and leaping around. They can be seen anywhere between Ramsey bay down to Langness. They occasionally come round to the west, but tend not to say on this side for too long.

Since September 2019 the island has been home to two very special solitary dolphins; Moonlight and Starlight. This mother and juvenile pair are considered temporarily resident to the Isle of Man since Moonlight arrived here in 2019 heavily pregnant and gave birth in Gansey bay. Moonlight hails from the east coast of Scotland and is part of the 200 strong Moray Firth population of Bottlenose dolphins. The pair have their own dedicated website where you can learn all about them. They can be seen daily between Peel and Ramsey via the north coast. 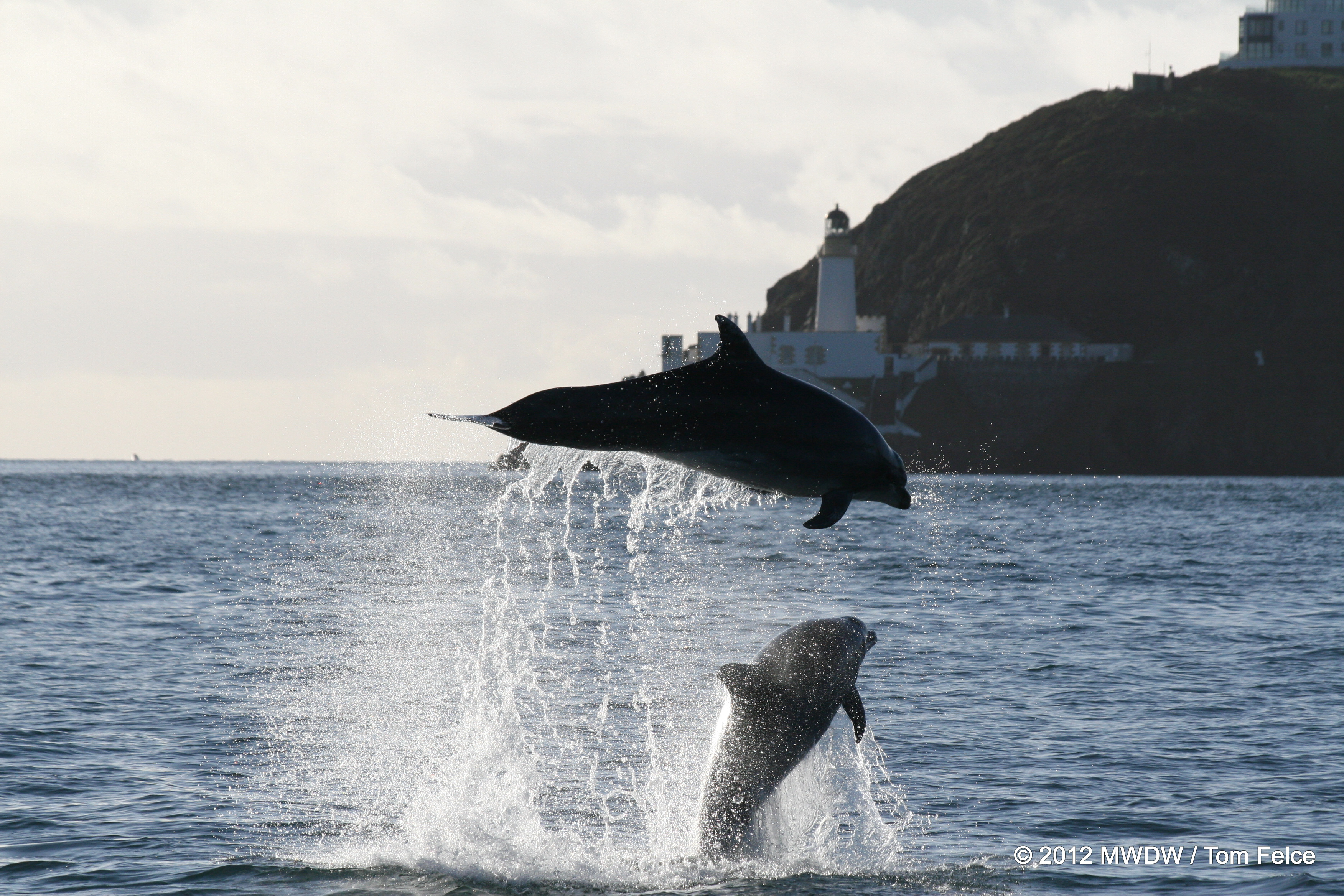 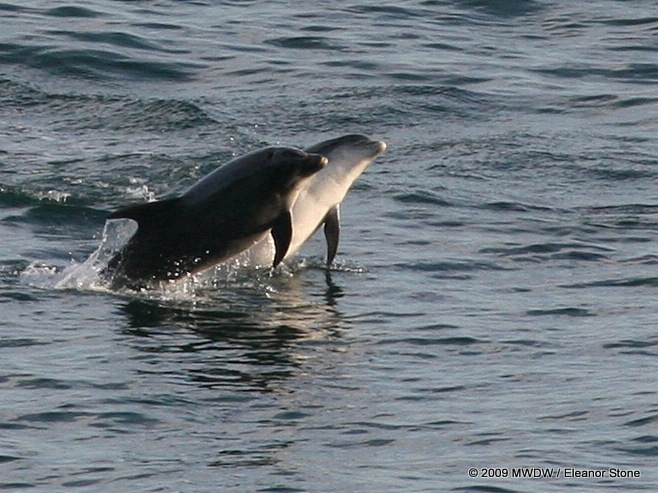 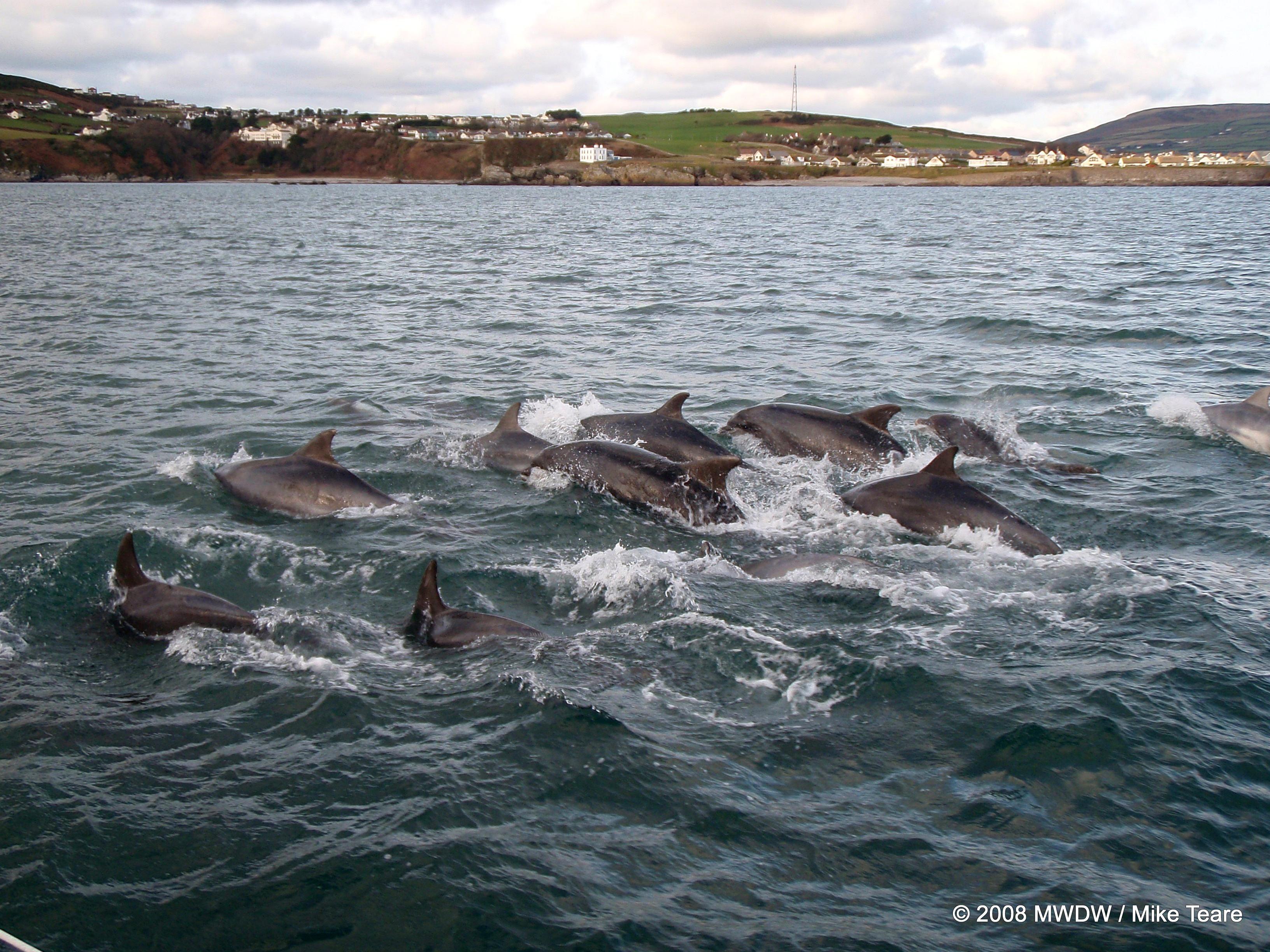